Kids are engaged in social media – “Almost three-fourths of 7th through 12th graders have at least one social media profile, according to a recent survey by the Kaiser Family Foundation. The survey group used social sites more than they played games or watched videos online.” By integrating this type of interest into the classrooms, kids can become more involved in school.

“Many mainstream social media sites like Facebook and MySpace are blocked in schools that receive federal funding because of the Children’s Internet Protection Act, which states that these schools can’t expose their students to potential harm on the Internet.”

Some safe social media tools sited in this article include: Kidblog.org, Edmodo, and Edublogs. 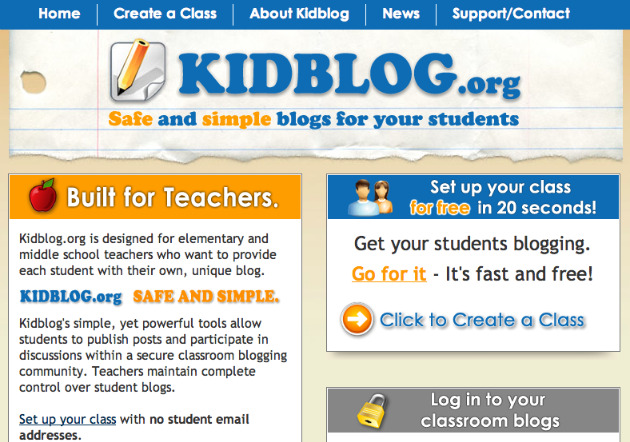 It is amazing to read about the results some teachers featured in the Mashable article have received. One person noted – “They were just as happy to do work rather than talk trash. All they wanted was to be with their friends.” Social media is the perfect solution for bring kids together to learn. They already are online talking with friends, why not take advantage of this interest?

Aside from what Mashable has to say about this, a video by CNN (at the bottom) explains how a shy student used Twitter to stand out, earn respect, and stop getting teased in school.

Texting students improved chronic absenteeism by about 35% without costing the school a dime in one school. What ideas do you have for how texting can help students?

Another point mentioned in this article is the fact that social media is public. As Robert Cialdini pointed out in his 6 principles of persuasions, when people commit orally by making something public it makes them more accountable. This is true for students, as Matt Hardy explains in the Mashable article –

“Students aren’t just writing on a piece of paper that gets handed to the teacher and maybe a smiley face or some comments get put on it,” he says. “Blogging was a way to get students into that mode where, ‘Hey, I’m writing this not just for an assignment, not just for a teacher, but my friend will see it and maybe even other people [will] stumble across it.’ So there’s power in that.”

What do you think about social media in schools?

Here is a great example of how Enrique, a history teacher, used Twitter to get his students involved:

Since we know you have been sitting around just a little too much reading the Salty Waffle since the weather went sour, we have a Wildcard Wednesday treat for you. Of course, social media is at the center, but were talking about some good ol’ fashioned physical activity today too. We wrote about how important…

Concert photos have always been an essential marketing tool for musical artists to promote themselves.  People will always crave pictures and video of their favorite musical artists.  Social Media has only fueled this fire and made photo and video sharing more accessible and easier than ever.  One type of photo sharing in particular is starting…

Nothing is more hipster than standing motionless at a concert with your elbows crossed while judging a musical act on their lack of obscurity.  However, these days it is just too difficult for most hipsters to pay for concerts with their minimum wage coffee shop incomes and their large expenses on vinyl albums. Elbo.ws allows…

“So, Mama, let me see if I get this right. Your saying that if you get more friends then they will tell their friends and you will get more money. More friends equals more money.” Sara summed up social media, inbound marketing, online content strategy, and life all in this brief description. The more friends…

If there were ever organizations on a tight budget, non-profits are it. They need to do as much good on the least amount of money. That’s why a good social media strategy is so fitting for many of them. Take a look at how some big name non-profits are doing with social media. Social truly…

A while back we learned how social media can help your congregation create an online bible study here. Since then, I have come across The School of Christ. This site is designed specifically for online learning. They explain their website is “dedicated to your spiritual growth and maturity through Christ-centered, Spirit-led, Scripture-based discipleship that focuses…