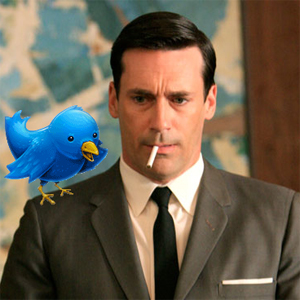 Well, YouTube may be the social network site that has more male users, but another site has some interesting trends going in the male direction. It is well-known that most social network activity centers on women and that they are generally more active in social media than men, but some Twitter stats about gender make an interesting case for keeping an eye on how men tweet.

Being that I am currently the only male employee at Salty Waffle, I’m careful not to get into too much gender competition because I am clearly outmatched. While I was reading though, I found this interesting post citing a study showing that men have more followers than women on Twitter despite the network being comprised of 55% females.

“On average, men had 15% more followers than women, with men twice as likely to follow another man as they were a woman, and women 25% more likely to follow men. Both men and women, however, were found to tweet at the same rate.” – PsyBlog

In the end, they and the study assert that there is something about Twitter that resonates more with men than with women. The question is, what is it? Why are men followed more on Twitter and what makes them more likely to be followed than women?

I honestly don’t have an answer, so I am yet again asking the Salty Waffle faithful to help. There is tons of great reading on this topic and I recommend these if you are interested. Twitter Trends, Men Follow Men

Help us figure this out, it is just the opposite of every other network out there and is very intriguing from both a psychological and business perspective. We look forward to ideas from both sexes! 🙂

I recently had the pleasure of meeting with and learning about a fantastic local Seattle company called ReUsies. ReUsies developed reusable lunch bags to replace the plastic ones that most people use to pack their lunches in. The core of their mission is to do right by their children and leave a better place for…

Most people browse many of the same sites every day and I’m no different. I like finding new sites, but for work there are a number that I must look at every day for recording Salty Waffle’s analytics. Yesterday I thought, there must be a way for opening up all those sites with one click….

Our friends at Faronics have been hard at work writing a bunch of great articles on everything from how to be safer online, to trends in social media. If you need a security expert, they are a great source. This is a guest post from Ryan at Faronics on just how important it is to…

Have you used Facebook’s new edit feature yet?  The social network launched this feature two days ago and it allows you to edit your comments and auto-corrected type-o’s.  I’m certain we’ve all had our share of comments we’d like to change and end up deleting the post because of it.  Now you can edit your…

No doubt, these three companies will change the social media world in the next year to three years. If you want to be ahead of the curve, check out what they do and why we think they they will be so important below. 1. Diaspora: Diaspora started to a lot of hoopla and continues to…

Trying to track all that great social media data? Yup! It has to be done if you want to be really successful with your social efforts. We’ve tried quite a few and talked with others about their experience and have narrowed it down to 3 full service tracking platforms with a focus on social media….